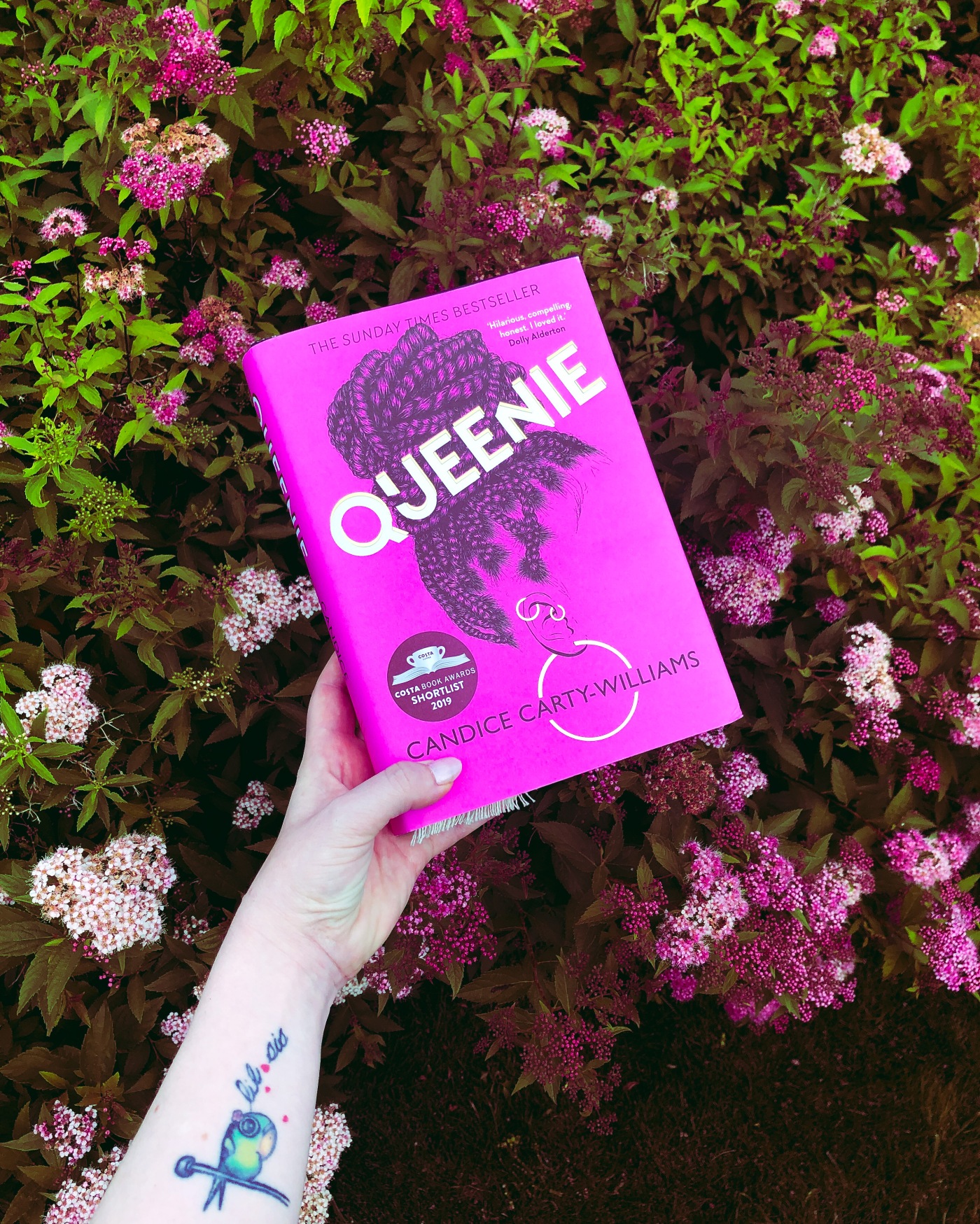 I read a hardback edition of Queenie.

Queenie Jenkins is a 25-year-old Jamaican British woman living in London, straddling two cultures and slotting neatly into neither. She works at a national newspaper, where she’s constantly forced to compare herself to her white middle class peers. After a messy break up from her long-term white boyfriend, Queenie seeks comfort in all the wrong places…including several hazardous men who do a good job of occupying brain space and a bad job of affirming self-worth.

As Queenie careens from one questionable decision to another, she finds herself wondering, “What are you doing? Why are you doing it? Who do you want to be?”—all of the questions today’s woman must face in a world trying to answer them for her.

When I shared pictures of me reading Queenie on Instagram, I got a couple of DM’s from people asking me if it was true that Queenie was a lot like Bridget Jones’s Diary. I wasn’t aware that the two were being compared before that, but when I finished reading it, I saw that mentioned more and more.
I have to say (even though I think Bridget Jones is good fun and all that) that to compare the two is incredibly unfair to Queenie and to Candice Carty-Williams. Why? Because the two characters are so different! And the two stories are so different! Just because both books are about single women in London, doesn’t make them the same kind of stories.

Queenie is such a complex character and what she’s going through in this book when it comes to mental health and racism goes far deeper than the struggles Bridget Jones was facing in the fear of becoming an old spinster. I’m not saying that loneliness isn’t a subject that can be complicated and emotional, but Bridget Jones is not a book about mental health, at least not in my opinion.
And the big difference between the two is also that in Queenie we have a story that goes to some quite dark places, and that was something that I really appreciated with this story.

Dating in this modern age, with people walking around with all their own kind of bagage and own sets of issues, it can be difficult, challenging, hearbreaking and just downright frustrating and (at times) impossible to wrap your head around.
I’ve been there, and I know a lot of people have, and that’s why I think so many fall in love with Queenie and relates to her character so much. Even though you haven’t gone through the exact same experiences as she has, it is still easy to fing emotions and frustrations to relate to.

Queenie and her friends will make you frustrated at times when you read about the choices that they make (like having lots of unprotected sex and choosing dating partners that clearly isn’t a good match), but that is also what makes these characters feel more real. They make mistakes, they are imperfect, and they are trying so hard to navigate through a complicated and weird time in this world and their lives.

Queenie is a book with lots of humor, cringe worthy moments, diversity, exploration of mental health, friendships, love, and relationships for good and for bad.
It explores darkness and brightness and is also extremely entertaining! You can’t help but root for Queenie!

I would highly recommend Queenie to those readers out there who likes more complex and complicated contemporary/romance fiction. But it is not for the faint of heart! It was quite sexually graphic, and as I mentioned, it does go some pretty dark places, so that’s something to be aware of when going into this story.