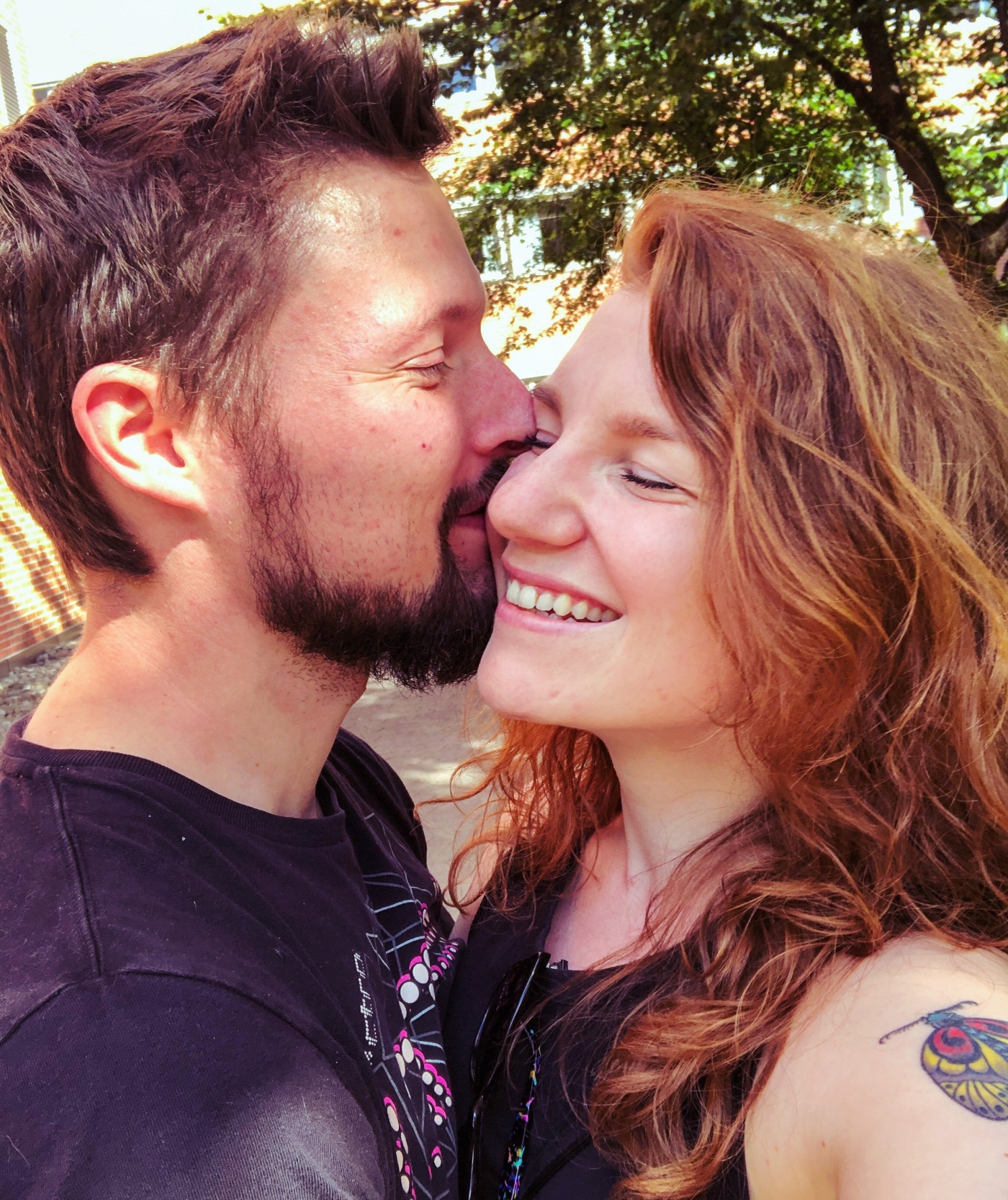 Now this is a story all about how
My life got flipped turned upside down
And I’d like to take a minute, just sit right there
I’ll tell you how I fell in love with my first love this year

I promised you guys the cheesy story of how I met the man that I’m now sharing a home with, and it’s quite the story.
It all started the summer before 7th grade. One of my good friends in my class had a cousin that was moving to town and he was going to start in our class. Now, it’s been 20 years. I don’t remember our exact first meeting, and I don’t remember who asked who, but somehow we ended up being girlfriend and boyfriend that summer before school started. One day I will find my old diaries and see if the whole detailed story was written down way back when.

Mikael was the first boy I kissed. Not just a peck, but really kissed. That happened when we were at a school dance. I remember being all excited about the prospect of the big first kiss happening, and I even told my best friend Kirsti all about how it was going to happen.
He and I went outside and sat behind a big mound that everyone used to play King of the Mountain on recess. We nervously looked up at the stars, I told him I was a little cold and he offered me his jacket, and then it happened. The very first REAL kiss! I was all nervous, giddy and sweaty-palmed.

Sounds like something right out of a way too cute movie, right?! But I promise you that it’s all true!

We were together for about five months. There were monthly anniversaries, making out in the dark while listening to R. Kelly’s “I believe I can fly”, and lots of emotions.

Then, (cue dramatic music) disaster happened!
His parents decided to move. He had to change schools, and it was over 20 minutes to drive there. That doesn’t sound so dramatic, right? But at the age of 12 and extremely few amounts of buses that could easily bring us to each other and back again, we decided to end the relationship. We both cried.

Many years went by, and we met now and again. When we were seventeen, we went to the same school once again, but not in the same classes.
I moved away from home after that year, and I didn’t see him for quite a few years after that, but (as we’ve discovered later on) we stayed in touch. He was much better at keeping in touch than I was.

He also started to spend a lot of time with one of my brothers as they had a mutual interest in music production and DJing. So, for many years he was still close with my family, but not that closely connected with me.

There was a birthday party of mine quite a few years later on that he attended, but I had a boyfriend at the time.

I turned 18, and I started doing some photoshoots here and there. Because of a modeling job I did at 18, I was invited to a specific party some years later. I brought three of my girlfriends with me. Apparently, he was there, and I didn’t even see him, but he saw me. And he has later on spilled the beans and told me that he was too nervous to come up to me for a chat. Silly Mikael!

Quite a few years went by after that were we texted now and then. Mostly Mikael trying to get in touch with me, and sending reactions to stuff I posted online, and me thinking that he was being a total dude who was only interested in me for one single thing, I paid little attention to these messages, and politely chatted with him if he started up a conversation. Oh yeah, way to make myself sound like somewhat of a judgemental sourpuss. I blame a lot of the men I’ve dated over the years for that.

We did, however, text a bit about the challenging times we both experienced in our relationships. Mikael had moved to Copenhagen in 2012, and I moved back to Oslo around the same time.

Then came 2018. Jason Mraz posted the schedule for his European Good Vibes Tour in 2019, and he wasn’t coming to Norway. But not going was not an option, so if Mraz wouldn’t come to the Norwegian, the Norwegian had to come to Mraz.

After going through both the tour schedule and my schedule, I was left with three options: Amsterdam, Copenhagen, and Vienna. I found out that Amsterdam had already sold out, and flying to Vienna was a lot more expensive than taking the bus to Copenhagen. I had also been looking at a tattoo shop in Copenhagen where I wanted to get my next piece of ink. The decision was made, and the tickets to see Mraz in Copenhagen were booked, and several months of waiting began.

The end of February arrived and I was sitting on an overnight bus to Copenhagen when Mikael and I started texting, and we talked about meeting up while I was in town.

“I’m headed to the Jason Mraz concert tomorrow, and there are still tickets available. You’re more than welcome to come along if you’d like!”

I didn’t think he was going to say yes, but he did, and then he booked his ticket. Then I started to get a little bit nervous.

What if it got super awkward? What if it turns out that we have nothing to talk about?

All of a sudden, I was 12 years again, with a belly full of butterflies that didn’t really make sense to me.

I had a few hours during the day where I checked in to my hostel, walked around the city and just enjoyed being the traveler that I am.
And later that night, we met at the train station. We hugged, and it was obvious that we were both a little shy and awkward, but it turned out that I had nothing to fear when it came to conversations. We talked and talked. We had some wine, and then the concert started. Mraz got up on stage after the warm-up band, and a little while into the concert, Mraz turned into the greatest wingman ever.
“Put your arms around the person standing next to you.”
And he did. I leaned into him and it all felt so new and known, exciting and safe, all at the same time. We stood there, swaying to the music, and his arm stayed in place around me.

After a little while, my mind started to race:
Is he going to kiss me? Why hasn’t he tried? Why do I want him to? Why do I feel like a nervous 12-year-old again? Why am I freaking out? IS HE GOING TO KISS ME ALREADY?

I’m usually not the one to make the first move, but right then and there, I decided to kiss him. And again, I had all of those feelings. It felt so familiar, but then again, it also felt totally new to me.
It was a night of swaying, kissing, blushing and beautiful music. We both cried.

I went to the hostel, and he went home, but before we went our separate ways, we made plans to meet for dinner the next day.
I remember going to bed that night (slightly tipsy and surrounded by 10 other snoring people) wondering if I might have made better choices when it came to love at the age of 12 than I had in the years after. Or could it all just be unfinished business that made it exciting? My tipsy self was confused and didn’t know what to think. My sober self the next morning was none the wiser.

We met for dinner the next day after I had gotten inked, and we were both acting like nervous teenagers. Both unsure of how to act. None of us daring to kiss each other. Both regretting not to after I got on the bus to go back to Oslo.

We texted a lot in the weeks after that visit, and we agreed on the fact that there was something there, but none of us felt sure about exactly what that something was. Both worrying that it might have been just unfinished business that made it all seem so exciting, or if it could be something more than that.

But what we did know was that we wanted to find out more about what that something could be. So we decided to spend Easter together. He booked a bus ticket to Oslo for April, and then life went on while we waited.

Easter came, and we were both quite nervous. It turned out to be the most wonderful time. We spent hours talking, day and night. We cuddled. We took things slow. And it felt so comfortable, so right, and so exciting, all at the same time. And when the time came for him to go back to Copenhagen, I didn’t want him to. I also didn’t feel like dating anyone else. He was my guy if he would have me. He did!

Trips back and forth. Phone calls for hours. And texting… So much texting!

And I realized one thing. Long distance relationships are tough! Especially when you live in different countries. I didn’t feel like missing him all the time. I wanted to look him in the eyes, not stare at a screen.

So, we talked it over, and he decided to move back to Norway. Not just that, but move in. Normally I would freak out at the prospect of moving in with someone that quickly, but for some reason, it just felt right.

And because this post is way too long already, I will just say that the rest is history!

Adjusting to living together has been interesting, challenging, but also fun and wonderful! I love him more and in a different way than I’ve loved any man before him. My plans for the future have changed as we’ve made plans together, and I’m so excited about all the new memories we’re going to make! And we’re bringing you guys along for some of it as well!

I’m so grateful, and I feel so incredibly lucky! And I guess that fills my cheesiness quota for a while.

Wish you all a wonderful week filled with love, laughter, experiences, and adventure!