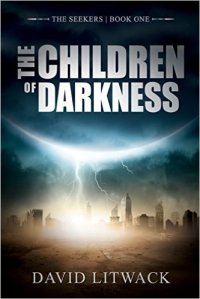 I read this book on my kindle. The Children of Darkness is the first book in the Seeker Trilogy.

“But what are we without dreams?”

A thousand years ago the Darkness came-a terrible time of violence, fear, and social collapse when technology ran rampant. But the vicars of the Temple of Light brought peace, ushering in an era of blessed simplicity. For ten centuries they have kept the madness at bay with “temple magic,” and by eliminating forever the rush of progress that nearly caused the destruction of everything.

Childhood friends, Orah and Nathaniel, have always lived in the tiny village of Little Pond, longing for more from life but unwilling to challenge the rigid status quo. When their friend Thomas returns from the Temple after his “teaching”-the secret coming-of-age ritual that binds young men and women eternally to the Light-they barely recognize the broken and brooding young man the boy has become. Then when Orah is summoned as well, Nathaniel follows in a foolhardy attempt to save her.
In the prisons of Temple City, they discover a terrible secret that launches the three on a journey to find the forbidden keep, placing their lives in jeopardy, for a truth from the past awaits that threatens the foundation of the Temple. If they reveal that truth, they might once again release the potential of their people.
Yet they would also incur the Temple’s wrath as it is written: “If there comes among you a prophet saying, ‘Let us return to the darkness,’ you shall stone him, because he has sought to thrust you away from the Light.”

Litwack’s writing took a hold of me from the very first page and held on tight throughout the whole book. The world building was very interesting and done in a good way. I felt like I got to know the surroundings and the system without getting confused along the way. The dialogues felt very real and unforced.

The way the book was written had me flying through it.

Nathaniel, Orah and Thomas had wonderful character development throughout the story.

I really enjoyed the dynamic between the three of them, and especially between Nathaniel and Orah. It was pretty obvious early on in the story that they had some kind of chemistry (beyond their friendship) but I really appreciated the fact that their relationship did not take over the story. It just added to the whole package without being cliche in any shape or form.

Thomas had me frustrated at times, but in a good way. It suited the character and the story as it progressed.

All characters were well built and I enjoyed getting to know them.

The only thing I missed in this was that I would have liked to get to know some of the vicars a little better.

This story never got boring. It started the build up from the very beginning and took some twists and turns I absolutely did not see coming.

There was a part in the middle of the book where it slowed down a bit, but in those parts we got to learn much more about the world and that kept it interesting until the next build up.

Unique and mysterious. It was an adventurous ride and I can’t wait to continue on with this series.

It was everything I could ask for in a good science fiction book!

Would you like your own copy of The Children of Darkness? Click on the Amazon or Bookdepository logo below: