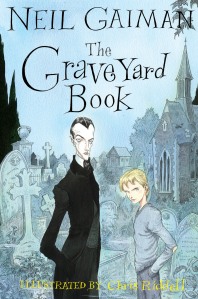 ard Book is a middle grade fantasy novel. The story starts with Jack (Also known as “the man Jack”) has murdered an entire family except for a toddler. When Jack goes upstairs to finish his mission he finds the toddler gone. The toddler has crawled out of his crib and outside to explore. He finds himself at the nearby graveyard and surrounded by ghosts.

The ghosts of the graveyard are uncertain of what to do when they realize that the child is alone and hunted, but when the Lady on the Grey appears and tells the ghosts that “the dead should have charity” and the baby be kept in the protection of the graveyard. Mr. and Mrs. Owens take him in as their own son and he grows up in the graveyard, protected by the dead.

This boys name is Nobody, but his dead friends call him Bod. He’s under the protection of Silas, a man that is neither dead nor living. Bod is a normal boy, but the protection of the graveyard makes him different. There are adventures both inside and outside of the graveyard for Bod to discover, but he has to be careful. The man Jack is still looking for him. He wants to finish what he started so many years ago.

Neil Gaiman is a master of captivating and magical writing. His words formed into beautiful pictures in my mind. They grabbed me and held me tight from beginning till the end. This is one of those books that I wish I’d discovered sooner. Gaiman has a playful way of writing about the dark and scary that just turns it into something extraordinary. This is my second Neil Gaiman book to read and I really look forward to reading more of his work.

Bod was such a funny and different character. I loved that we got to be along for the ride as he grew up in this very unusual place. He felt very relatable in spite of his very different lifestyle. One could easily recognize the curiosity and wonder of growing up and into ones teens. The frustration of feeling left out and wanting to belong and explore.

My two favorite characters in this book (except for Bod) was Silas (Bod’s protector) and Elizabeth Hempstock (un-justly executed witch). Both of them brought something very special and unique to the story. Silas wrapped in mystery and Elizabeth being the sassy sidekick.

The first time I met his tutor Miss Lupesco in the book she annoyed me a whole lot, but she grew on me and by the end of the book I wanted to be a part of the graveyard family myself.

This story starts with a bang and as I read about the murder that was committed I had my thoughts about this being a book for children. But then again, children’s literature today isn’t the same as it was when I was a child. And when the story progressed I found it to be very intriguing, exciting and beautiful.

The man Jack’s hunt made for a thrilling story, but the most wonderful part of this story is Bod and the way he grows and develops throughout the story. And all of those wonderful characters blend into one collection of delightful personalities that made this a fantastic read.

It took a hold of me from the beginning and I loved every part of it. Had me curious and anxiously waiting from beginning to the end.

There are so many things that I loved about this book! And I really do look forward to reading this for my son when he’s a little older. It’s different and wonderful! And the artwork by Chris Riddell is gorgeous!!

Want your own copy? Click on the BookDepository logo below:

Do you have a favorite Neil Gaiman book? Let me know in the comments below!

Until next time, Toodles 🙂

One thought on “The Graveyard Book by Neil Gaiman- REVIEW”