Red Queen is the first in The Substrate Wars series and was sent to me by the author for an honest review. 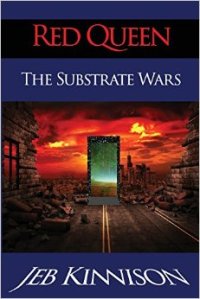 This is a science fiction thriller set in the US in the not too distant future. The  country is run by a Unity Party, combining the worst of both the Democrats and the Republicans. The Bill of Rights is being ignored and people are being monitored by the government. Terrorist attacks results in more restrictions on people’s freedom and privacy.

The story follows a group of young people who are tired of their countries censor, stagnant economy and no jobs for young educated people. And when one of their favored professors suddenly disappears after being contacted by Homeland Security who suspects that he’s staying in touch with a former student who now runs a rebel group.

These young students discovers a new kind of technology that could ever free mankind or be the ultimate weapon to control or destroy us if it falls into the wrong hands. What are they to do with it? And they have to work fast before Homeland Security arrests them all and get their hands on the technology. Who can they trust? How do they know that they’re not being watched already?

I was very intrigued by the synopsis when I was contacted about this book and it did not disappoint me. It was fast-paced and exciting. The characters were really well made but I would have loved to have gotten to know them a little bit better. In the beginning of the story some of the writing could get a bit too technical for my taste, but it definitely picked up and got easier to follow as the story progressed.

I can’t say that I’ve read anything quite like this before so I went into this with a very open mind and was definitely pleasantly surprised!

I’m really looking forward to seeing where this series goes and I definitely recommend this if you like political thrillers and science fiction.

Want your own copy? Click on the Amazon or BookDepository link below: