The place to be for of us all gadget geeks right now is certainly Berlin. The IFA 2013 starts this Friday and we’ve all been waiting and wondering if anything will blow our minds away this year.

I had the pleasure of going to IFA last year, but this year I just didn’t have the time or the money to go. But don’t be fooled! I’m still paying close attention to what’s happening in Berlin. And as usual Samsung chose to have their unpacked show ahead of this year IFA.

And what do we have here? 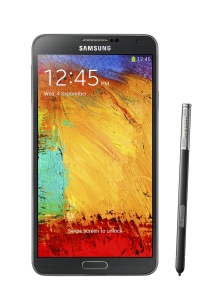 The much-talked about and rumored Galaxy Note 3 was finally launched! I’ve been waiting for this moment for quiet some time now. I had a monster geek crush on the first Galaxy Note when it was launched and I had the pleasure of owning one for a while and it didn’t disappoint me at all. I’ve also had the opportunity to test out the Galaxy Note 2 over a period of time and for some unexplainable reason, these phablets of Samsung has gotten under my geeky skin and gotten comfortable.

Oh and if you’re thinking about making jokes about how girls like big things, just don’t. It has been done one too many times already 😛 haha!

The Galaxy Note 3 is bigger, bolder and more beautiful! It looks like Samsung is trying to win over the consumers that don’t like Samsung because of their phones cheap plastic feel by adding a faux-leather backside to their newest family member. I’m not sure if this will do the trick, but it’s hard to tell without having had the opportunity to feel it hands on myself. But from what I’ve read around the blogosphere the ones that has had their hands on it says that it’s somewhat of an improvement, but the longer you look at it, the more it looks like cheap plastic again. So, for better or for worse? Let us wait and see till the end result is rolled out to the stores. And speaking of rolling out, the date to remember is 25th of September.

The rumors of the Galaxy Note 3 coming on strong with a 6-inch screen fortunately were proved wrong today! But it’s getting pretty close to that with its 5,7-inches Supermodel 1080p display with 368-ppi-pixel density. It’s thinner and lighter (168g.) than the Galaxy Note 2. The edges has been sharpened and the flip cover has somewhat of the same feel as the one we were introduced to at the launch of the Samsung Galaxy S4. 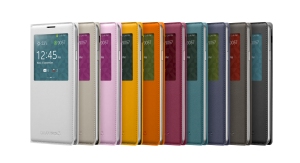 Now we’ve taken the first look of the new boy/girl in town (which by the way comes in three colors; black, white and pink)  and we liked what we saw. But hey! Looks aren’t everything you know. So let’s see if it has some of that charming personality that’ll make us want to take them with us home. 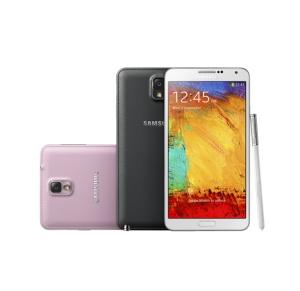 What else is new? The S pen of course!! And with it comes a few new features. The Scrapbook does exactly what it says. It lets you gather information all over and save it for when you might need it. The great thing about it is that if you for instance saves a picture cut out from Amazon all of the website information follows that cut out. That’s a feature I can actually see getting useful!

Action Memo lets you highlight a section of a note you’ve written and a menu of actions pops up underneath.

S Finder lets you search through all of your handwritten memos and cutouts, as well as images, media files or websites. Pretty much everything you ever saved on your Galaxy Note 3.

Another cool feature on the Note 3 is the Magazine UI. The look of it is not that far from the HTC One Flip board, but they have managed to make it their own by using the big screen and being able to personalize it to a new level.

So am I excited? Well, yes and no.

I think I’ve been so deep in my geek crush with the note that I’ve developed some kind of love-hate relationship to it. I love the feel of a phablet and the S pen is so handy for a creative soul like myself. But at the same time I did expect more. Like a spoiled child in candy land I don’t even know what more I want out of this phone but I don’t feel that WOW after seeing it the first time.

But even though I love it and I’m disappointed at the same time I think the feeling that is most prominent at this present time is the curiosity. I can’t wait to actually be able to get my hands on it and to find out for sure how I feel about it.

I’m adding Engadget’s hands-on video so that you can see a little more what this phablet is al about.

IFA, I miss being there with you but remember that I’m watching over you!